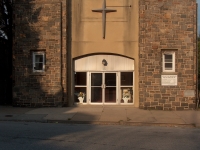 THE HISTORY OF THE NEW MT. JOY MISSIONARY BAPTIST CHURCH
...upon this rock I will build My church, and the gates of Hell shall not prevail against it.
Matthew 16:18

Almost 2,000 years have passed since our Lord spoke the words of this text to Peter, and history has borne testimony to the truth of His declaration. In spite of intense opposition, severe persecution, great trials, dire threats, and suppression, the church of Jesus Christ ahs not been destroyed. Even hell itself has not prevailed against it. The New Mt. Joy Missionary Baptist Church is a living testimony that Christ is still calling fellowships into being.

Rev. Donaldson had been praying for guidance from the Lord. On Easter Monday, April 4, 1983, he was approached by Pastor Joseph Stewart of the New Lebanon Calvary Baptist Church, who offered him words of encouragement and a temporary place to worship. After constant prayer and seeking advice from other men of the clergy, Rev. Donaldson felt directed to mention this possibility to other Christian individuals.

The Lord richly blessed us during the 22 months we worshipped at New Lebanon Calvary Baptist Church, both spiritually and financially.

In November, 1984, the Lord blessed us again by allowing us to place a contract on a church building at 1725 Division Street. On Sunday, March 3, 1985, we marched into our new home, with 50 members on the church roll.

Since we have been on Division Street, the Lord has continued to bless us with a growing membership and determined spirits.

As the years progressed, Pastor Donaldson saw that he needed help at the church. After much prayer and counsel, he asked Elder Donald W. Major to be the Assistant Pastor of New Mt. Joy.

Our hearts were saddened by the loss of three of our organizers: Deacon Arthur Jolly and Pastor Samuel Donaldson in 2001 and Sister Thelma Culp in 2002.

In January, 2002, the church elected Elder Donald W. Major as the Interim Pastor. In September, 2002, Elder Major was installed as the Second Pastor of New Mt. Joy. In September, 2009, Pastor Major resigned from New Mt. Joy to begin a new fellowship.
In July, 2012, the New Mt. Joy Missionary Baptist Church (under the leadership of Pastor-Elect LaTonya Donaldson) adn the Greater Refuge Apostolic Temple (Under the leadership of Apostle Dr. Darryl E. Hamilton) came to gether to become a greater force in the Kingdom of God.

During the years, the church family has accomplished many things Three major tasks were to purchase and remodel the property at the corners of Division and Laurens Streets. This serves as our outreach center. The other major tasks were to install a new heating and cooling system in the sanctuary and the burning of our mortgage in 1999. We have also installed a new sound system in the sanctuary.

New Mt. Joy was a featured church on the television show, Lift Ev'ry Voice, which was hosted by Pastor William Calhoun of the Trinity Baptist Church. We also hosted a radio broadcast called, The Faith Restoration Radio Broadcast on WBGR.

We offer thanks and praise to Almighty God , for it is the belief of this church family that this organization of the body of Christ was sanctioned by Him. It is our belief that while sojourning here, we are to make a difference in the lives of everyone who comes across our path. Therefore, our constant prayer will be, Lord, lead us and guide us along the way, for if You lead us, we will not stray.